The use of quire tackets to hold the bifolia within individual gatherings together while they were written in is well known from the medieval period, but the discovery 18 months ago of quire tackets in a fifteenth-century printed book in the library at the Wellcome Institute in London, which I was examining with a Japanese student, Yuri Nomura, came as a surprise. The book is a copy of Peter Lombard, Glossa in epistolas Pauli, Esslingen: C. Fyner, not after 1473 (Wellcome Institute Library, 4.f.2) from the Augustinian Monastery of St Pancratius in Ranshofen, and then in the collection of William Morris. It is in a contemporary inboard binding sewn on three double alum-tawed supports with beech-wood boards and covered in blind-tooled dark brown tanned calf. The centre-fold of each gathering has a parchment sewing guard and underneath the sewing guards at the head and tail (and therefore not part of the sewing structure) of almost all the gatherings are lengths of thin thread, about 45-53 mm long, which formed separate loops over the head and tail edges of the gatherings and which the binder left in place when sewing the book. As the printed leaves are neither paginated nor foliated and the signatures are not signed, the quire tackets would have had the advantage of holding the bifolia within each gathering together in the right order, while manuscript catchwords on the final versos of each gathering would have allowed the binder to sew them in the right order. It may be that the quires were tacketed in the printer’s workshop.

I have since seen two other examples (one shown to me by Andrew Honey of the Bodleian Library) and I would be very interested to know if any others have been identified. 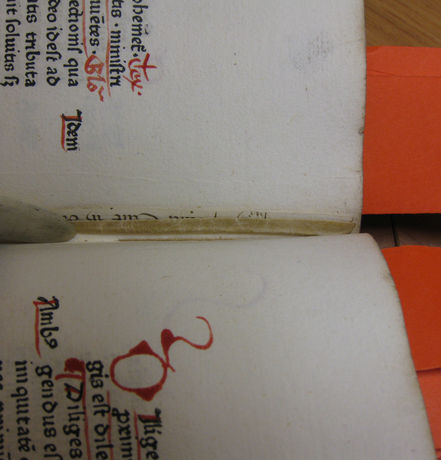