The 7th Ligatus Summer School, following the success of the courses in Volos, Patmos, Thessaloniki, Wolfenbüttel and Venice, is to be held this year in collaboration with the Institut National du Patrimoine and the Centre Culturel des Irlandais in Paris. We are delighted to announce the summer school this year in Paris, a city with a long tradition in the study of the history of the book. This year students will have the opportunity to see bindings from historic collections in the city, including the Centre Culturel des Irlandais, the Bibliothèque de l'Arsenal and the the BnF - Richelieu, (département des manuscrits). Also, this year, the structure of the summer school has been enriched to include new developments in the field and more extensive hands-on sessions. Paris is a centre of culture in Europe and a city which always inspires creativity and academic excellence. Join us for this year’s summer school to learn more about books and their documentation in this beautiful city.

The contribution that bindings can make to our understanding of the history and culture of the book is often neglected, but they can offer insights into the study of readership, the booktrade, and the provenance of books which are often not available elsewhere. In order to realise this potential, it is important to understand not only the history of the craft but also to learn how to record what is seen in a consistent and organised way. Librarians, cataloguers, conservators, book historians and all scholars who work with early books, need therefore to understand the structure and materials of the bindings they encounter in order to be able to record and describe them. Such descriptions of bindings are not only valuable for the management of library collections, pursuing academic research and making informed decisions about conservation, but are also important for digitisation projects, as they can radically enrich the potential of image and text metadata. It is our belief that bindings should be seen as an integral part of the book, without which, our understanding of the history and use of books is often greatly circumscribed.
The main purpose of the summer school is to uncover the possibilities latent in the detailed study of bookbinding and it mainly focuses on books that were bound between the fifteenth and the early nineteenth century. While both courses concentrate in particular on the structure and materials of bookbindings, each of the two courses offered in this summer school looks at bindings from different geographical areas and with a different approach. The first course looks at the development of bookbinding in the eastern Mediterranean and gives theoretical and hands-on training in a) the manufacture of specific aspects of Byzantine and Post-Byzantine bindings and b) the development of methodologies and tools for recording bindings, working with examples from the collections. The second course looks at the history of bookbinding as it was carried out in Europe in the period of the hand press (1450-1830), with the opportunity to look at examples from different collections during the afternoons.

The courses are taught in English and each is open to 12 participants. Although the courses can be attended individually, participants are encouraged to attend both courses in order to get a more complete understanding of the issues discussed, through the comparison of the wide range of bookbindings considered in each week. Since these are not beginner-level courses, the participants are expected to be familiar with bookbinding terminology and have a basic knowledge of the history of book production in the periods under discussion. A basic understanding of the use of databases is also desirable for those who will attend the course in the first week.

This five-day course is divided into two interconnected sessions. The sessions on Monday, Tuesday and Wednesday are shared by Dr Velios and Dr Boudalis, but this year participants of this course will be asked to select one of two concurrent sessions for both Thursday and Friday.

Dr. Georgios Boudalis, will focus on the major structural and decorative features of Byzantine and post-Byzantine bookbindings and their evolution in time and space. The relationship between these bindings and the early bindings of the Coptic and other Eastern Mediterranean cultures will be discussed, during lectures, slide-shows and demonstrations of real bookbindings from Parisian collections. This part of the course will concentrate on the influences of and comparisons between these different types of bookbinding. It will consist of six (shared) 90-minute presentations from Monday to Wednesday, supplemented by a two day workshop on Thursday and Friday during which participants who chose to attend it will be able to bind a small book in the Byzantine manner.
The other part of the course will be taught by Dr. Athanasios Velios and will deal with the methodologies and techniques that can be used to record bookbindings. After an introduction on the capacity and scope of each methodology and technique, this session will focus on a) the semantic web and the CIDOC conceptual reference model, b) standardised vocabularies for book descriptions (SKOS), c) the development of database schemas for both the relational and the hierarchical model, d) the advantages of various implementation tools and e) photographic records and workflows for large collection surveys.
A large part of this session will be devoted to the actual development and use of a sample of a bookbinding glossary, a documentation system for recording binding structures and the actual recording of specific bindings. This session will consist of six (shared) 90-minute presentations from Monday to Wednesday and eight 90-minute hands-on workshops on Thursday and Friday for those students who chose to attend them. A basic knowledge of the use of databases is desirable for this course.

This course will follow European bookbinding from the end of the Middle Ages to the beginning of the Industrial Revolution, using the bindings themselves to illustrate the aims and intentions of the binding trade. A large part of the course will be devoted to the identification of both broad and detailed distinctions within the larger groups of plain commercial bindings and the possibilities of identifying the work of different countries, cities, even workshops without reference to finishing tools. The identification and significance of the different materials used in bookbinding will be examined, as well as the classification of bookbindings by structural type, and how these types developed through the three centuries covered by the course. The development of binding decoration will be touched on, but will not form a major part of the discussion.
The course consists of ten 90-minute sessions each morning with Powerpoint presentations (over 800 images will be shown). Actual examples of bindings will be shown in the afternoon sessions.

The courses are supported by Ligatus and the University of the Arts London, with generous help from the Institut National du Patrimoine and the Centre Culturel des Irlandais. We have therefore been able to reduce the cost of the course for this year to £350.00 per week, excluding travel, meals and accommodation.

A number of accommodation options will be provided to the participants . A detailed schedule of the courses can be sent upon request. Applications, including a short CV can be submitted online (http://www.ligatus.org.uk/summerschool/).
For information about registration please e-mail Karen Di Franco (k.difranco@arts.ac.uk ) and give the e-mail subject as: 'Ligatus Summer School'. A reading list will be sent in advance to those who will attend the courses. The deadline for applications is 1 July. The participants will be contacted by the end of July.

About the Institut National du Patrimoine:
The Institut National du Patrimoine (INP) is a higher education institution of the Ministry of Culture and Communication. Its mission is to recruit and train curators for public institutions and to train conservators. The five-year conservation programme is divided into seven main fields: Painting, Sculpture, Textile, Objects (metal/ceramics/glass/enamel), Furniture, Photography and Book and Paper. The INP also offers a wide range of training sessions for professionals and organises conferences on cultural heritage.
2, rue Vivienne – 75002, Paris
(www.inp.fr)

About the Centre Culturel Irlandais:
The Centre Culturel Irlandais is located in the historic Latin quarter in Paris, in the 5th arrondissement. As well as its diverse programme of events, the CCI offers residencies for Irish artists and Irish language courses, as well as being home to the Irish Chamber Choir of Paris. The brief of the Centre Culturel Irlandais is to show a wide range of art forms, including visual art, film, literature, music and combinations of all of these.
The Old Library of the Irish College, built between 1772 and 1775, is one of the few surviving library rooms of the many colleges, convents and monasteries which were situated in the Montagne Sainte-Genevieve area of Paris until the end of the 18th century. However, the original library collection was entirely lost during the French Revolution. The current collection consists of almost 8000 volumes, consisting of printed books and manuscripts, half of which were written or published between the 15th and the 18th centuries.
5, rue des Irlandais 75005, Paris
(www.centreculturelirlandais.com)

About Paris in September 2012:
In the first weeks of September, Paris is in transition between the last days of summer and the surge of activity bought about by the general return to work after the very quiet month of August. The weather is usually as nice as in the summer but the city starts again as the new school year does and as French administrative life resumes. This concept of rentrée extends to literary, theatrical, cinematic and all the art-related and commercial activities, offering a great many new exhibitions and events of all sorts. One of the major events is the Journées du Patrimoine (Heritage days: 15-16 Sept.) during which museums and historical monuments, such as libraries, usually closed to the public, offer free access, guided tours and workshops. This year’s topic is “les patrimoines cachés” (hidden heritages).
Find out more here: http://www.moreeuw.com/histoire-art/journees-du-patrimoine-2012.htm

About Ligatus:
Ligatus is a research centre of the University of the Arts London with particular interest in the history of bookbinding, book conservation, archiving and the application of digital technology to the exploration and exploitation of these fields. Ligatus’s main research projects currently include the conservation of the books in the library of St. Catherine’s Monastery on Mount Sinai and the development of a multi-lingual thesaurus of bookbinding terms.
Find out more about Ligatus here: http://www.ligatus.org.uk

Thank you for a memorable week together in Venice. I can't wait to get back to schema writing and (...) to have a look at George's great notes. 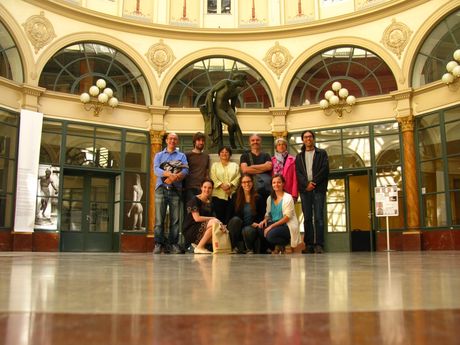 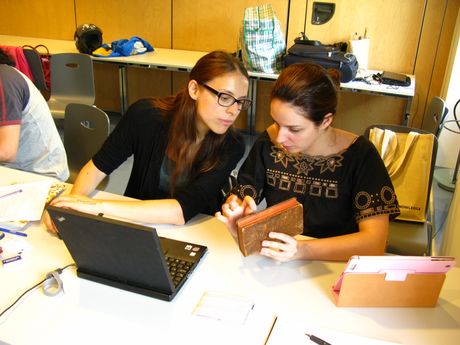 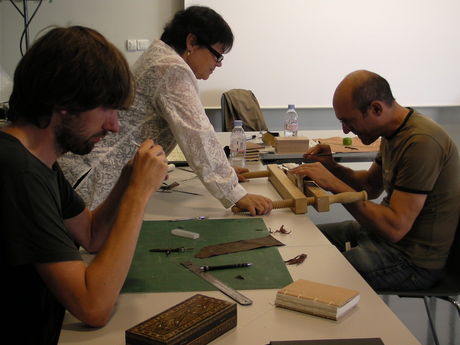 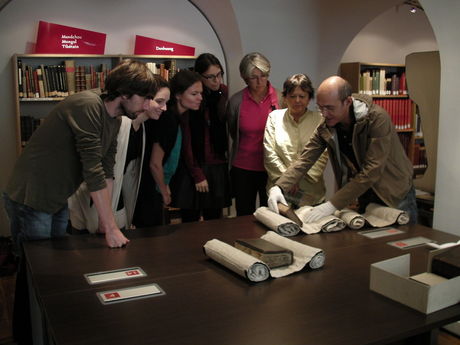 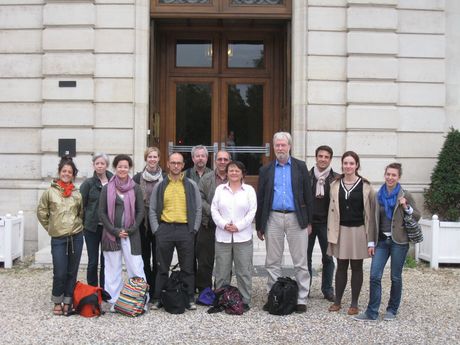 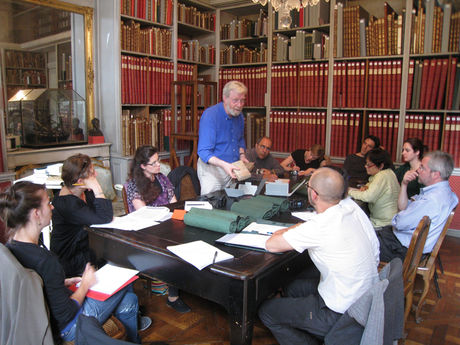