The Portable John Latham, Hudek, A., and Velios, A. , London, (2010)
The Portable John Latham features a selection of documents from the personal archive of the late British artist John Latham, presently maintained in his last home and studio in Peckham, South London. Through reproductions of letters, invitation cards, exhibition reviews, performance scripts and images, the publication retraces Latham’s pioneering practice over six decades, from the late 1940s to his death in 2006. Published on the occasion of John Latham: Anarchive in association with Whitechapel Gallery, the book also includes an interview of John Latham by Charles Harrison from 1968 and a glossary section.
Edited and introduced by Antony Hudek and Athanasios Velios.
Funded by the Ligatus Research Centre, University of the Arts London, with the support of Cassochrome, the John Latham Foundation and the AHRC.
Published by Occassional Papers. 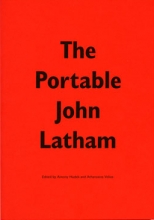