The monastery of St. Catherine in Sinai, Egypt, is the oldest active Christian monastery in the world. The monastery's library holds a unique collection of manuscripts from the 4th to the early 19th century. Although the great majority are written in Greek, there are substantial collections in Arabic, Syriac, Georgian, and smaller numbers in 7 other languages. Ligatus has undertaken the task of assessing the condition of the manuscripts, together with its important collection of early printed books, classifying the information using modern digital techniques and offering advice on further conservation work.
Manuscript survey
On 3rd of March 2006, Ligatus conservators finished the condition survey of the 3,307 bound manuscripts in the old library of the Monastery. This completed the most detailed condition for a whole collection of this size, and it has involved the participation of 33 people from nine different countries.
Printed books survey
On 1st of November 2007, the last team of conservator finished the condition survey of about 1,000 early printed books in the library, which is a good sample of the large printed books collection. The recording was done digitally using XML records and digital photography.
Boxing programme
The protection of the books in the Monastery is a high priority and the use of boxes is an essential part of that. Ligatus has developed a new type of box which will allow horizontal storage of books (as Greek-style bindings were intended to be stored) and endurance in the extremely dry conditions of Sinai.
Cell 31A
The discovery during repairs in early 2003 of manuscript fragments glued to the walls of an alcove in the west wall of Cell 31A led to a project financed by the Ruth Breakwell memorial fund to remove the manuscript leaves and also some fragments of early paper from the late 17th-century wooden partition.
Moving programme
In October 2009 the last item of the library collections was placed in temporary boxes and stored in a safe location. The library collections will remain in storage during building work which about to start. This programme involved a large team of conservators and a sophisticated tracking system.
Conservation workshop
During the planning for the rebuilding of the library, space has been allocated for the construction of a conservation studio. Ligatus researchers have been developing the plans for the studio. 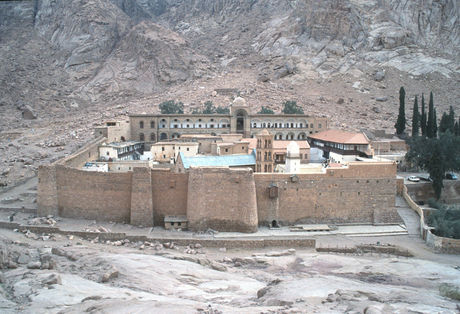