An inboard binding with a laced cover

Dirk de Bray, in his manuscript description of the binding of books of 1658, A Short Instruction in the Binding of Books followed by a note on the gilding of edges by Ambrosius Vermerck, describes in detail how to make a typical ‘Dutch vellum binding’ or a parchment-covered laced-case binding with boards, in which the boards were added to the cover after the latter had been attached to the bookblock by lacing the sewing-support and endband slips through its joints. He follows this description by introducing briefly another way of making these bindings in which the boards are attached to the outermost endleaves before the book is covered. He describes the process as follows:

You take a book that is already finished except for the making of a vellum binding. You line a piece vellum with paper and fold the spine into it; then you take pasteboard and on one side you cut it off straight; you brush a little paste on the middle of the flyleaf and lay the cardboard on this [the straight-cut side on the spine of the book, a straw’s breadth from it] and put the whole, when it is dry, in the press; after that you trim the cardboard round the book in such a way that there is a protruding edge on it [the squares: the cardboard is a little larger than the book]; then you put it in the vellum [the spine of which has already been folded] and push the points [slips] through once only [towards the outside] and put the whole back in the press; but first you brush the cardboard [with paste] and lay the vellum on it, and only then do you put the whole in the press.
When it is dry you take the book out of the press and push the points inside; and then you fold the edges of the vellum round the cardboard; but first you tear off the flyleaf to which the cardboard was at first fixed [this turns the rest of the flyleaf into a stub], because now the cardboard is fixed to the vellum; then you poke the ends of the headband core through the folded-in vellum to create the cap. … Once the vellum has been folded round the cardboard you again brush the paste onto the flyleaf that you have just torn off [i.e. the second endpaper; this becomes the pastedown], close the book and place it in the press.

(Dirk de Bray, A Short Instruction in the Binding of Books followed by a note on the gilding of edges by Ambrosius Vermerck, Amsterdam: Atelier de Ganzenweide, 2012, pp. 96-100)

This order of construction, by adhering the boards to the bookblock before the book is covered, appears to turn these books into inboard bindings rather than laced-case bindings, but by tearing the outermost endleaf off the board before turning-in the cover, and then re-attaching it to the book by lacing the slips through its joints, the binding reverts to a laced-case binding, and should still be described as such. The description, at least as translated in the most recent facsimile edition, is confusing when it comes to the handling of the endleaves, as the leaf that has been removed from the board cannot become a pastedown if it has been torn to a stub, so either it is a stub that is pasted to the board under the next endleaf, which then becomes the pastedown, or it remains a full leaf and can then be used as a pastedown. Either way, it remains a laced-case binding.

The binding found on a book in Lambeth Palace Library (Johann Marck, In Præcipuas quasdam Partes Pentateuchi Commentarius, Leiden: Apud Samuelem Luchtmans, 1713, Lambeth Palace Library, A26.1 Ψ) as part of the survey project undertaken this January by four students on the Camberwell conservation course, appears, however, to offer yet another variation which does create an inboard binding, but which from the outside looks just like a parchment-covered laced-case binding with boards (Fig. 1). In this example, the boards were first adhered, before the cover was attached (somewhat as in de Bray), to what is now a stub with a torn edge (but which may originally have been the inner half of a complete leaf) and also to the extensions of transverse parchment spine linings, right up the spine edges of the boards (not as in de Bray, who stated that there should only be “a little paste on the middle of the flyleaf”). This results in the head and tail ends of the stubs lying under the turn-ins, which indicates that the boards were attached permanently to the endleaf stubs before the book was covered. This form of board attachment was reinforced by the fact that the extensions of the transverse spine linings were also adhered to the insides of the boards under the stubs. At head and tail, therefore, the lining extensions and the stubs crossed the joints, and this in turn meant that they had to be lifted to allow the cover to be turned in. When the binder lifted the extensions, he also lifted with them the part of the paper stub that that was pasted over them. Before pasting them back, after the cover was turned in, he cut the lining extensions short at an oblique angle, which left the exposed surface of the boards under the cut away portions clearly visible under the pastedowns, thus revealing the sequence of the binding process (Fig. 2). The sewing-support and endband slips must have been laced out through the cover as it was put onto the book and were then laced back inside the cover after it was attached to the boards. The slips therefore lie over the stubs, but underneath the pastedown. In the absence of any name in the literature, I have named this structure an 'inboard binding with a laced cover'.

A book with almost exactly the same structure, but which was never covered, survives in the Herzog August Bibliothek (Neu-Vollständigers Marggräff. Brandenburgisches Gesang-Buch, Bayreuth: Johann Gebhardt, 1660 (HAB: Yv 1278.8° Helmst)), the only difference being the use of stuck-on endbands of a typically German sort with a secondary sewing rather than the sewn endbands of the typically Dutch sort. The stub (with a torn edge) of the outermost endleaf was pasted to the inside of the board over the transverse lining extensions (Figs. 3a and 3b). Had the book ever been covered, at least part of the head and tail ends of this stub (and the endband lining extensions under them) would have needed to have been lifted in order to allow the cover to be turned-in over the head and tail edges.

Since finding the Lambeth example, I looked again at an odd volume that I have had for many years (De Spectator; of Verrezen Socrates. Zesde en laaste Deel. Uit het Engelsch vertaalt door P. le Clercq. Twede Druk, Amsterdam: By Hermanus Uytwerf, 1730), and discovered exactly the same phenomenon (Fig. 4), showing yet again how careful you need to be when observing bindings – I had never noticed this detail before. The question raised by these bindings, of course, is who used this technique, why, where and how often – and why de Bray offered his second technique as an alternative to what appears to have been the much more common laced-case technique. Or was it, in fact, rather less common than we think? Do we in fact have to go back over books already examined to check on which of the three techniques was actually used to make each one?

The photographs are shown by kind permission of Lambeth Palace Library and the Herzog August Bibliothek, with special thanks to Katharina Maehler for taking the photographs of the Bayreuth edition. 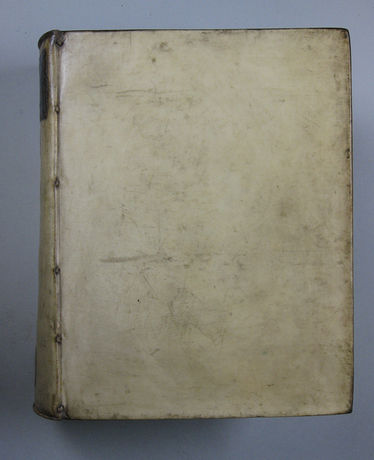 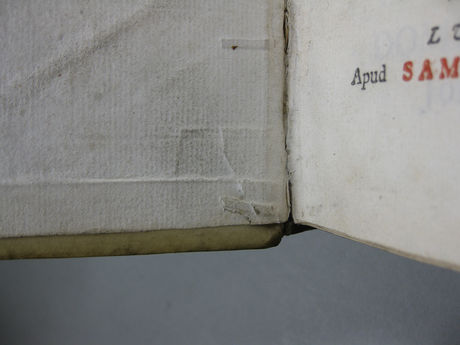 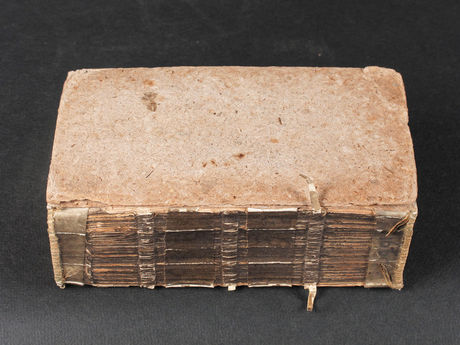 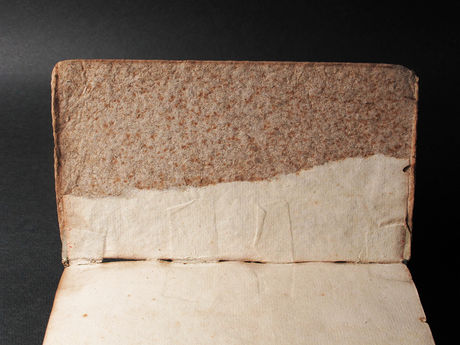 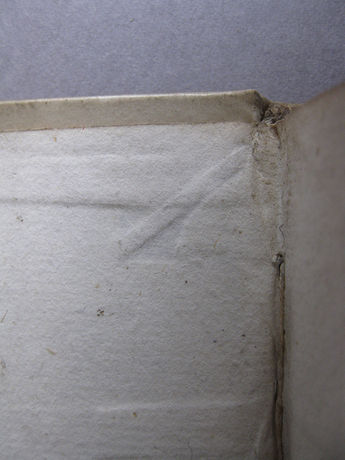