The discovery during repairs in early 2003 of manuscript fragments glued to the walls of an alcove in the west wall of Cell 31a in the western range of the monastery led to a project financed by the Ruth Breakwell memorial fund to remove the manuscript leaves and also some fragments early paper from the late 17th-century wooden partition so that repairs could be carried out to the barrel vault of the cell, damaged by leaks from the bathroom in the guest room above it.
The manuscript leaves, all written in Arabic, but coming from more than one manuscript, had been stuck to the walls immediately above three wooden shelves (the lowest of which had been removed). When we got access to the alcove with proper lighting, we discovered that the two remaining shelves had also been lined on the top surfaces with more manuscript leaves, in places three layers thick. The discovery of this extra material meant that extra hands were needed, and I was fortunately able to help Jane McAusland, who repaired the Achtnames for the new museum in 2001, and Maria Kalligerou, who had already taken part in many survey visits.

The first job was Maria Kalligerou and myself to remove the whitewash from the manuscript fragments so that they could be properly examined, photographed and mapped on polyester film. The latter procedure was particularly important as the removal of the whitewash revealed that some leaves had been badly eaten away by insects, leaving only small scattered fragments of parchment on the walls. The cleaning also revealed that the leaves had been stuck to the fresh, unpainted plaster with an animal glue, creating a strong bond which prevented us from separating the complete leaves from the plaster in situ, though we were able to lift the smaller fragments.
With Father Daniel's permission, we took the decision to cut the plaster off the walls under the larger fragments, which proved to be dirty and demanding work in the hot and airless alcove. Fortunately the plaster came away from the granite walls of the alcove relatively easily, though the sever mould damage found on the western end of the topmost row of leaves (caused by the water leaking from above) prevented us from saving all the small, mostly blank, fragment of parchment from that area. We were able, however, to save at least 95 percent of the leaves. The laminated layers of parchment on the shelves meant that we have to dismantled the shelves and remove them entirely, being careful to make sure that all the pieces were properly recorded so that they can be reconstructed and returned to the alcove after the parchment is lifted from them.
All the fragments were then labelled and boxed for safe-keeping until such time as we can lift and separate them from the plaster and shelves.

While Maria Kalligerou and myself were carrying out this work, Jane McAusland was carefully removing the overlying paint layers from the paper fragments on the wooden partition. Her work revealed that the woodblock print was too fragile and fragmentary to be safe to lift from the panel, as was the piece of paper with what appears to be nineteenth-century Greek manuscript on it. These fragments were consolidated in situ and covered with a layer of Japanese tissue paper to protect them under whatever decorative treatment may be applied to partition during repairs and redecoration. However, Jane did uncover and was able to lift the almost complete figure of a Byzantine saint. 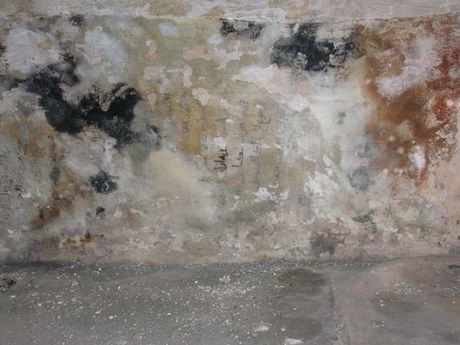 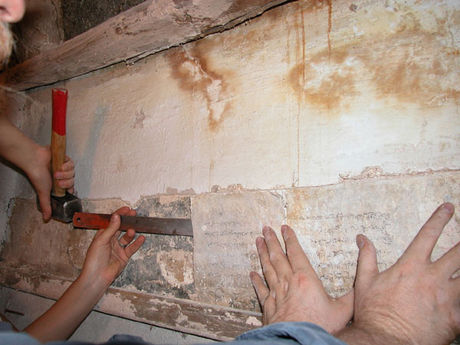 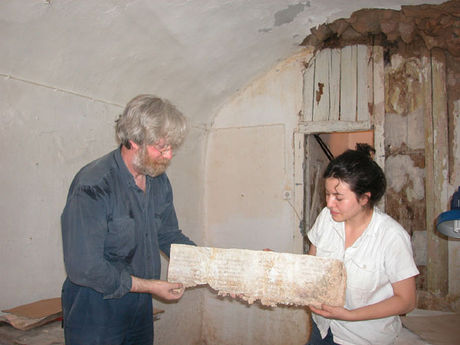 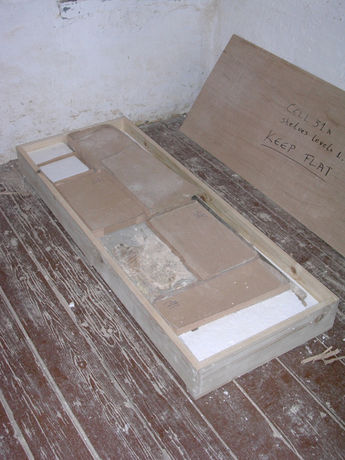 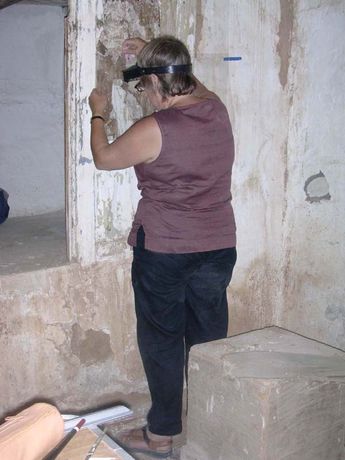 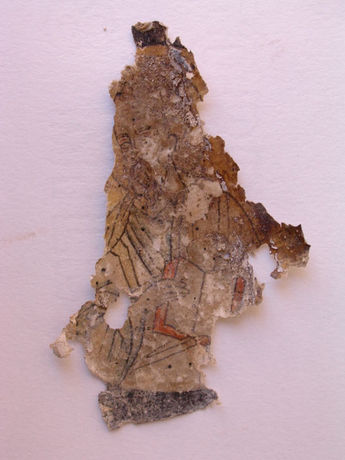